First Lady Eleanor Roosevelt was often photographed knitting for the war effort or at least carrying her voluminous knitting bag. She effectively launched the World War II knitting effort at a Knit for Defense tea held at the Waldorf-Astoria in New York City on September 31, 1941. Franklin and Eleanor Roosevelt’s daughter Anna Roosevelt Boettiger, who wrote for the Seattle Post-Intelligencer and was married to its publisher John Boettiger, lived in Seattle from 1936 to 1943. The so-called First Knitter of the Land was a frequent visitor.

The question of why garments should be knit by hand sometimes arose during the early months of the war. Knitters countered with the fact that donated hand-knits cost the military nothing, were produced without expense and machine wear and tear, and that hand-knit socks outlasted machine-knit socks. Most importantly, “The propaganda effect of hand knitting cannot be estimated in terms of hard cash, but it is considerable. A sweater for a bluejacket. A helmet for a flying cadet, made by some devoted woman in a small town far from the war, is sure to arouse interest in the navy or Air Force among the friends of the woman doing the knitting. And she herself feels that she has an active part in this vast conflict; she is not useless, although she can do nothing else to help win the war” (The New York Times, January 22, 1942).
Posted by jbishop19 at 9:16 AM 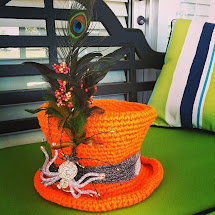 jbishop19
I’ve been programming since 2004, and have worked with many awesome people from all over the United States. When I’m not designing sites and working on the Web, I like to travel. When that’s not possible, I enjoy knitting, crocheting, photography and hanging out with my family and friends. Mostly I just love working on the Web, designing, writing, and creating content. In the future, I would like to mobilize my operation, work remotely on the Web, and see the world. But for now, I just want some hot cocoa and my laptop. I will crochet up some socks and develop an app later.